Breakfast was the same as the Comfort Hotel in Hakata. I had hoped each would change things up a bit like Super Hotel but evidently not. I made a note to myself to avoid booking the same chain hotel for multiple days on future trips. 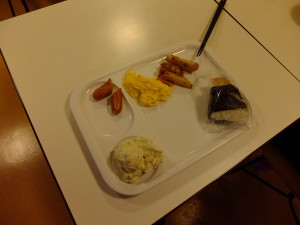 Just more of the same

Being in Okayama was a bit like being back to civilization. There road was filled with cars, buses and trams. The main street was lined with office buildings and the station area had several department stores. While I’ve always had a thing for rural Japan, being back in a city didn’t feel too bad either, with all its conveniences. 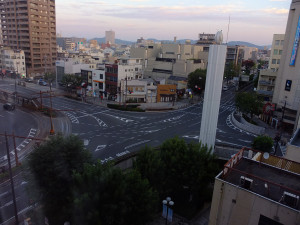 Okayama from the hotel room

I had contemplated whether to go to Hiroshima today or tomorrow. The plan was one day in Hiroshima, and one day in Okayama/Kurashiki. While it would be more straightforward to do Okayama/Kurashiki today then go to Hiroshima tomorrow and onward back to Hakata, I am reluctant about such a plan as it required that we drag our luggages with us and I have heard that it was not easy to find a locker in Hiroshima, being both a popular tourist destination and a lack of lockers compared to other stations of its size. Especially since my parents had one of those larger suitcases which required an L size locker. If we failed to find a locker initially we would be forced to circle around the station until we could find one as there was absolutely no way we could drag it with us to Miyajima.

Alternatively, if we did Hiroshima as a day trip from Okayama then there was no problem with the luggage. Finding a locker in Okayama was easy and worst come to it there is a luggage keeping service station. We would waste an hour an half travelling to and back from Hiroshima, but I would be able to sleep easy regarding how to deal with luggages. Only with a rail pass was I able to contemplate such changes to the plans.

In the end I decided on doing Hiroshima first. Even if we could find a locker in Hiroshima my estimate was that we would lose 30-40 minutes doing so, so it was not as big of a lost in time doing a day trip.

Shinkansen to Hiroshima, then 20 minutes local train to Miyajima, followed finally by the ferry. Along the way we saw more westerners than I had seen in all my trips together. Miyajima truly was one of Japan’s most iconic tourist locations. 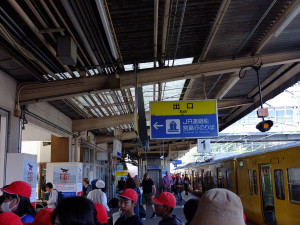 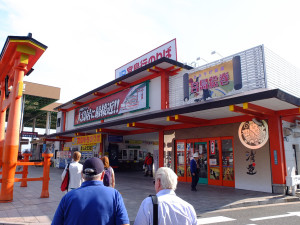 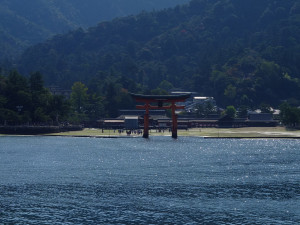 The giant torii in the distance

Upon getting off the ferry, the first thing one notices was how many tourists there were. Foreigners, Japanese, tour groups. Especially the tour groups, it was an endless train of student groups, not sure if this was the time of year or it’s always like this at Miyajima. 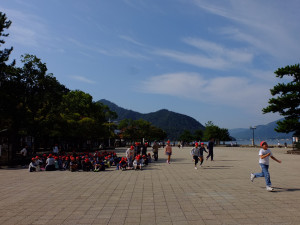 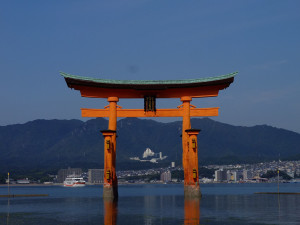 The torii up close. The tide isn’t low enough today to walk up to it 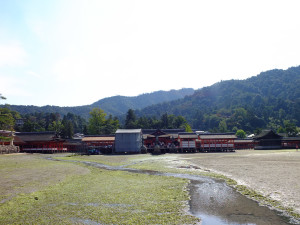 The area around the shrine is all dried up

The plan was to walk along the shore to the Itsukushima shrine, get as close as possible to the big torii since it was low tide, but not enter the shrine yet. Head up and take the ropeway up to Misen mountain, spend maybe an hour and half up there then head back down for lunch.

Randomly we ran into the ropeway shuttle bus stop just north of the shrine. The ropeway station didn’t seemed too far to walk, people said maybe 5-10 minutes, but if there’s a shuttle then might as well take it. 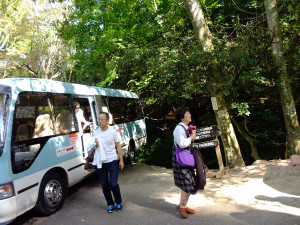 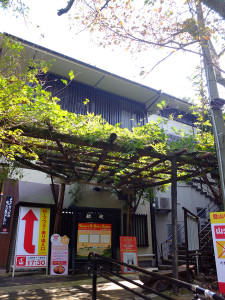 The ropeway up Misen mountain had two sections. First section was a standard 4 seater gondola up to one peak, then a two way 30 person gondola that ran every 30 minutes across the valley to another peak (more often if the gondolas were already full at either end). The second gondola had only 4 seats, the rest had to stand. Fortunately we arrived ahead of the crowd and were able to get seats. 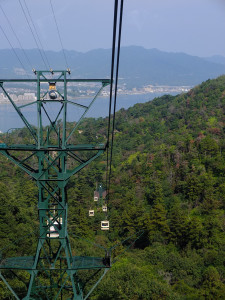 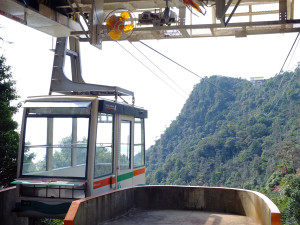 The ropeway had a good view of the Seto inland sea and the woods of Miyajima. From the top ropeway station it was another 20 minutes walk to the Reikadou temple at the main intersections of the mountain trails. There were trails that lead back down which takes about an hour if one had one. Another trail leads to the top of Mt Misen, about another 15 minutes steep ascent. Reikadou temple held a sacred flame that’s said to have been kept burning since the 8th century, along the trails were various small shrines and stone stacked pergodas, an indication of the sacredness of the mountain. 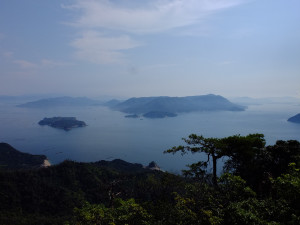 View of the seto sea 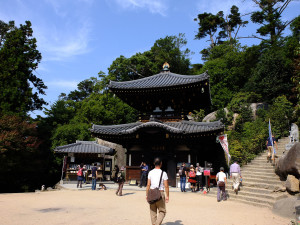 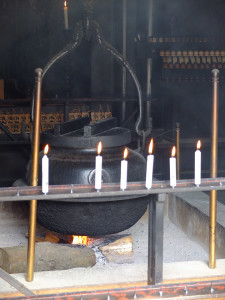 The ever burning flame

At the peak was a viewing platform that offered a 360 view of the island and Hiroshima in the north and Shikoku in the south. I welcomed the cool breeze after exhausting climb. I had to use an even faster pace than usual as time was limited. My parents had turned back at the Reikadou temple already. 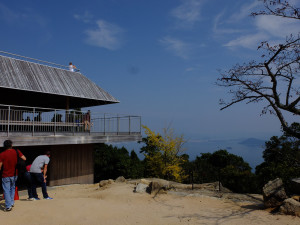 It was hard to say whether Mt Misen was worth the time and cost of visiting. The view was good and there were plenty of spots of religious significance, where monks meditated and worshipped. I do feel a little bit of disappointment, as if it didn’t quite live up to its renown.

During our descent the gondolas in the opposite direction were mostly packed, the tour groups had arrived on the island in force. A good thing we were already on our way down. When we got to the bottom of the ropeway we learned that the shuttle bus had gone to lunch, which explained all the people walking up the paths. And for a moment we were wondering why they didn’t take the shuttle.

The walk from the ropeway station to the shrine area turned out to be not very far at all, maybe 8 minutes downhills. It would have taken longer had we had to walk uphill.

It took a little wandering to find the restaurant I was looking for. From the map it looked like it was in one of the backstreets but turned out it was in the main pilgrim path shopping street. Called the Iwa Mura, it was an eatery that had good ratings for both oysters and anago, famous dishes of Miyajima. 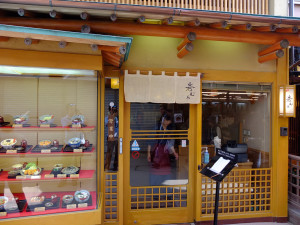 The oysters were quite big but compared to Taiwanese style of cooking they had more of that seafood smell. Parents didn’t like it as much, I felt they were alright. The anago was basically unagi yaki lite but the meat not as refined and less flavoury. 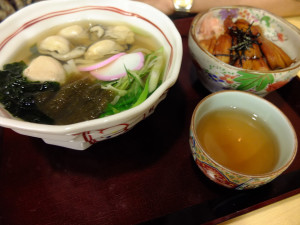 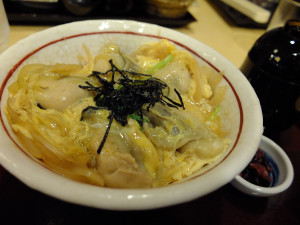 It was now about 2pm, when the tide was at its highest. We squeezed in between the endless columns of students, slowly following the floating corridors while avoiding being swept away by them. The temple’s walkways made several right angle turns above the lapping waves, connecting several halls and buildings, standing above yet not quite floating as the brochures claimed.

Up close, the shrine did not looked as crimson as the photos one usually sees, though it might be because of the bright sun light. I have found that shrines and temples looked their best in the rain, perhaps on a rainy day the Itsukushima shrine would show more of its magic. Today, not so much. 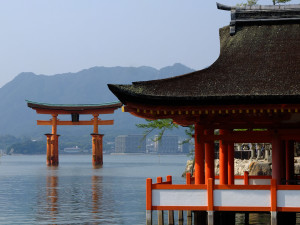 The shrine and torii now in the water

People also say that Miyajima felt completely different if one visited at night or early morning before the crowd shows up. It would require staying in Miyajima or at the very least Hiroshima and alas, that was not an option.

The day was unbearably hot. It was near the end of October yet it was like summer, a few minutes in the sun and my shirt was soaked through with sweat.

We returned to main street and found a small cafe to escape the heat. The nice thing about Japan’s weather was that it had low humidity unlike Taiwan so as soon as you’re out of the sun it was relatively cool.

While dad took a nap at the cafe, I did a circle around the main street, the back street and some of the other temples on the island. On display at one end of the main street was the largest rice spatula in the world. I still haven’t qute figured out the exact history of the spatula and Miyajima, it seemed every shop was selling some kind of spatula souvenirs in addition to the usual paper fans, crafts and other very Japanese like souvenirs aimed at westerners. 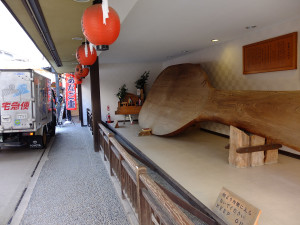 The backstreet was a lot more interesting. Away from the tourists, there were the small grocery stores, fish stores and other businesses that served the island’s residents. I thought it was fantastic that these small business remained open up till now. There could not be that much businesses on the island, short of the elderly most residents I imagine would get their weekly shoppings from the mainland. 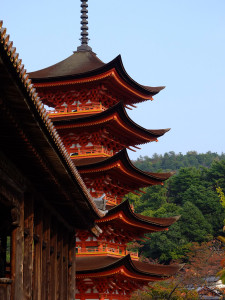 The thousand tatami hall and the five level pergoda

I scout out a spot by the coast that looked to have a decent angle for the sunset. While waiting I saw the deers chase down several tourists for food, even snatching the tourist guide brochures out of their hands or bags. The deers of Miyajima were quite notorious for their daring and persistence, only surpassed in reputation by their cousins in Nara.

Unfortunately the sun’s angle was not quite right at this time of year, it was quite difficult to frame the sun and the giant torii together, and the mountains obscured its last leg above the horizon. If it were in the summer I believe the sun would be much further to the right and one may even be able to frame the sun going down in between the torii. 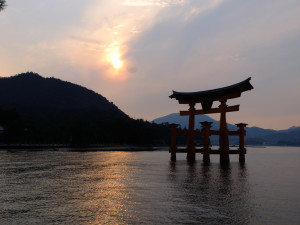 We headed for the ferry at around 5:20pm. Even now there were tour groups disembarking.

It was about 6pm when we got back to Hiroshima station. For dinner I intended to have okonomiyaki, since we were in Hiroshima. According to tabelog there was a highly rated okonomiyaki place just in the station on the shinkansen side.

Despite being a larger and more important city than Okayama, Hiroshima station felt a little run down. The souvenir areas was poorly organized with random stalls filling the open space, and the restaurant areas not as well lit nor looked as modern as their Okayama counterpart.

The place was called Mitchan Okonomiyaki. When arrived there were a queue of three people ahead of us and was seated within a few minutes. We had gotten there right before the queue began to form in earnest, not long after we sat down there were a line of over ten people waiting outside. 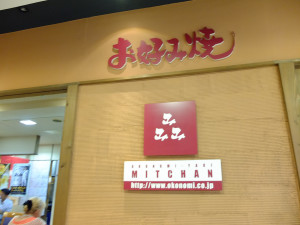 Hiroshima style okonomiya had a thin crepe with soba or udon on top mixed with choice of shrimp or other meats, the whole thing was then covered by egg and pan fried. I could not say I liked it too much, it was very savoury and creamy which wore off the tastebuds quickly. It continues to bewilder me that Japanese cuisine have this polar extremes of very light almost no flavouring in order to accentuate the natural flavour of the ingredients, to drowning everything in soysauce, salt, cream or sugar. This is best symbolized by udon and ramen I think, two of the most common foods yet opposites on the flavour spectrum. I think I might have touched on this before, why I sometimes prefer having McDonalds or other fast foods while in Japan despite other options available. At least I know what I am getting and I’m not going to be feeling sick or parch mouthed for the next hour which is vital when I am already not feeling 100%. 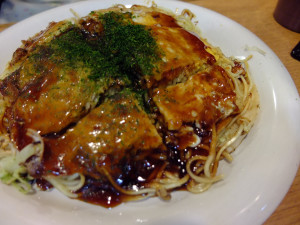 We got back to Okayama at about 730pm, allowing some time to further check out the areas around the station on my way back to the hotel. 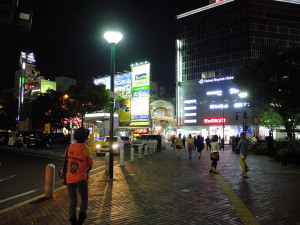