Not much to be said about the routine, breakfast at 6:30 with the menu still by large unchanged. 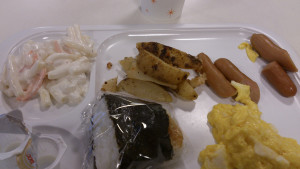 Even riceballs run out of varieties

The hotel was situated right next to the Kouragoen and Okayama castle, one of the reason I chose it as well. There should be enough time to take a walk around the garden and get back in time to check out, and a quick break too if we had time.

I didn’t have a very good impression of Koragoen the last time I was here but it was still worth visiting for my parents since they have never visited a large Japanese garden before. 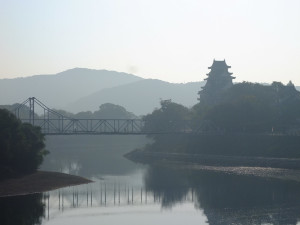 The morning is a little foggy. The silhouette of Okayama castle looms in the distance

Like many such gardens, Kouragoen once was the local daimyo’s personal recreation space, following the same principle of pond, islands, streams and mountains. A miniature cosmo in the backyard to enjoy and reflect upon. These days it is known as one of the three great gardens of Japan. I do not have many points of comparisons to say whether that reputation is deserved, perhaps some day I will visit the other two great gardens and find out.

The garden did felt that more care had been given to it than before. It’s possible that since I arrived here in the off-peak season last time, they bad neglected in keeping everything up and running, or were intentionally leaving things unkept for maintenance reasons. 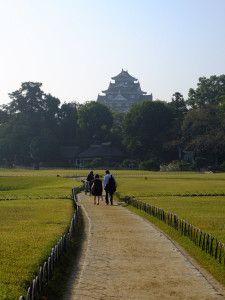 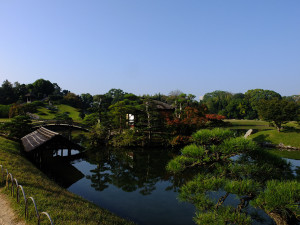 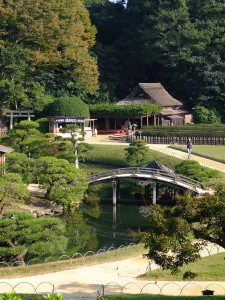 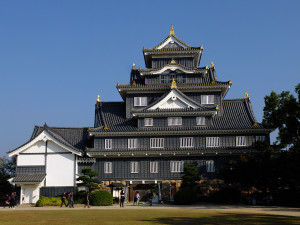 We did a circle about the garden and existed the side door up to the castle courtyard. Didn’t enter the castle as my parents wasn’t really into those things. Plus we should head back to the hotel soon.

After check out we store our luggages in a locker at the station. One of those big lockers was enough to store all 3 bags. Then headed to Kurashiki. 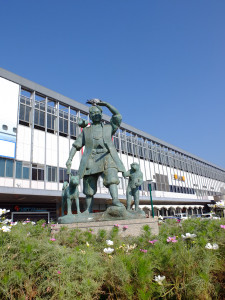 One of the main reasons for allocating a day in Okayama area was partly because mom wanted to check out an outlet. She didn’t really know what she wanted from it but since she heard everyone talking about shopping at these outlets for bargains she wanted to check them out. Honestly no one in my family knew how to shop but ah well, at least she’d know what outlets were like I suppose.

Outlets tended to be some way from the city due to the space and cost required, so generally one had to plan for going to an outlet explicitly. However Kurashiki was one of the odd case where the outlet was directly accessible from the main railway line station, just north of Kurashiki station through the adjoining Ario mall. This made Kurashiki the easiest and most accessible outlet choice, and if we were going to visit the outlet then you might as well hit the historic area, and if you’re spending all that time in Kurashiki then you might then as well toss the Okayama castle and Kouragoen into them. The day could have been allocated to Onomichi or Hiroshima CBD or even just more time in Sanin, the outlet contributed heavily to the way the schedule was.

October must be one of those times to be out travelling as Kurashiki historic area was packed full, not quite like Miyajima, but still feeling like there were people everywhere. Since I had been here before and this was mostly for my parents, I more or less just wandered about on my own at my own pace, not worried about where I was going. There were at least two pair of couples taking wedding photos in the area, dressed up in traditional outfit and posing for photos at various iconic spots. After that I noticed a workshop specializing in wedding photos which I must had missed last time. It made sense, I’m surprised I didn’t think of it before, the area was perfect for such purpose and I would wager if I looked more closely again I would find a few in Takayama’s historic area too (though maybe people won’t want to travel that far out for photos). 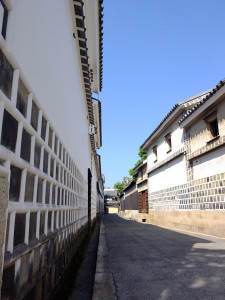 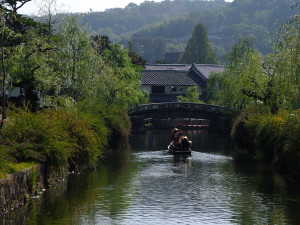 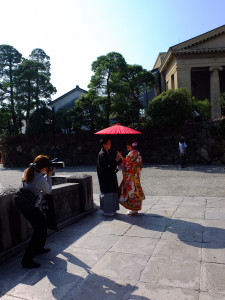 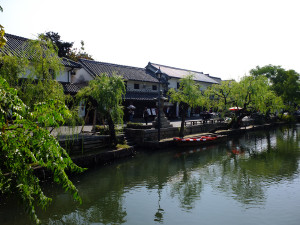 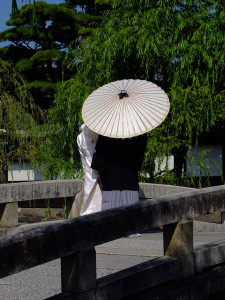 There was this musix box place in the Ivy Square area that had some neat trinkets and even music box toys. Mom considered buying one for my nephews but I voted against it, the boys would toss and wreck them within hours.

About lunch time we head back to the station. The original plan was to try out the sushi train place in the Ario mall, however my parents did not seemed that keen on the idea. I think it might be the hot weather which was tiring everyone.

We ended up eating at the McDonalds at the station for convenience. I chose the teriyaki burger, a permanent item on their menu I believe, think I had the same last year. 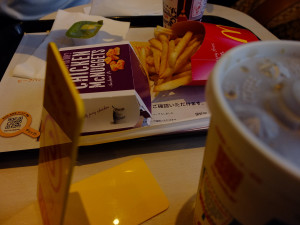 I showed my parents to the outlet and a baby specialty shop in the Ario mall. Originally my brother wanted me to get him something there for my nephews but found it elsewhere. Mom thought she would check it out anyway. 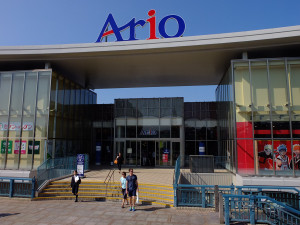 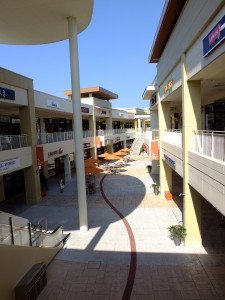 I left them to the shopping and turned back to the station. The plan was to take a break at the Doutor and let the sun cool off abit. Really do love Doutor, and they can be trusted to be everywhere I go. I think I have visited a Doutor at least once on every trip. Whether for breakfast or just a coffee break. 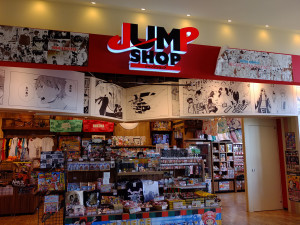 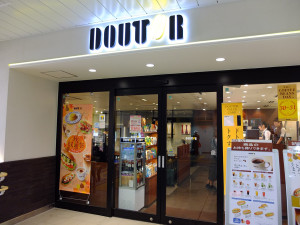 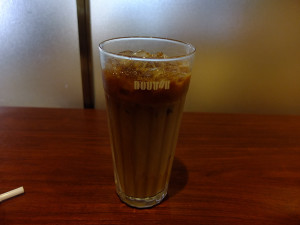 After some rest I headed back toward the historic area, taking a detour down a backstreet. Kurashiki’s streets felt narrower, older and generally gave the impression of not being as well off as Okayama. I took some more pictures but eventually the heat got the better of me. 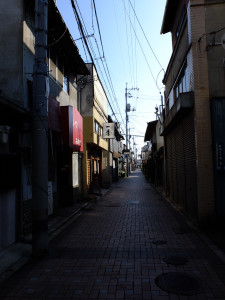 Feeling abit exhausted I went back to the station to check out the department stores instead, not too much to them, some interesting stationaries. While breaking at a 7-11 I noticed that all the staff coming out of the staff only door at the mall would bow before continuing to their post, even if there were no visitors nearby. On one hand I have to admire them for how much respect and seriousness they treat their job with, even if maybe deep down they don’t really believe and it’s only for appearance. On the other hand maybe bowing before returning to duty is taking things a little far.

I meet up with my parents after 3pm. Not too surprised, they were already done with the outlets. Dad bought a pair of shoes but that was it.

Since they finished early I had to then make a choice. The original plan was that we would stay till dinner then visit the historic area at night when the area is lit up. But that would require waiting around for another 2 hours. We would also be getting to Hakata around 9 pm at the earliest.

Weighing that up, I decided to leave then and forgo the light up. The historic area is not that big and at best I considered it would just be about 15 minutes to take all the photos, hardly worth waiting over 2 hours for.

We returned to Okayama and mom wanted to get bento boxes from the tonkatsu place we had the night before. We could have eaten there, but maybe mom was getting abit too tired and just wanted to get to the hotel to rest? Either way we bought some bentos to take with us onto the shinkansen. 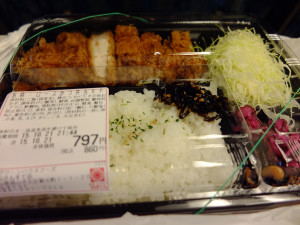 It’s a bit over 2 hours from Okayama to Hakata, making it about 7pm when we checked in the hotel. The prime location of Comfort Hotel was much appreciated, knowing a room and hot shower was waiting right outside the station. 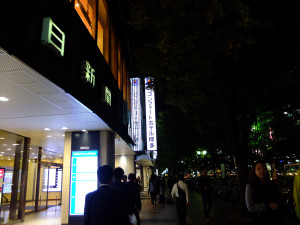 Since we returned early Hakata station was very much still alive. After a quick shower I went back out to explore the station fully. 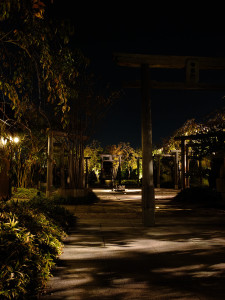 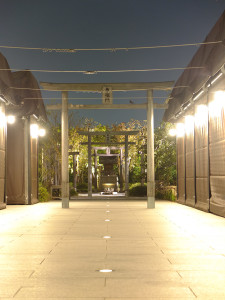 It is a bigger maze than I initially realized, consisting of several other sections including a ramen street (which I already knew about), another dining street where there’s a queue outside a teppanyaki place. A Kyushu specialties street, an omiyage gift street, and a backstreet which was half under renovation with some utility and goods stores. 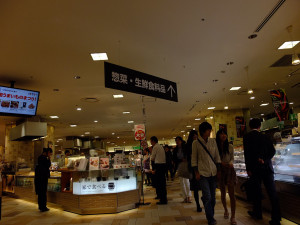 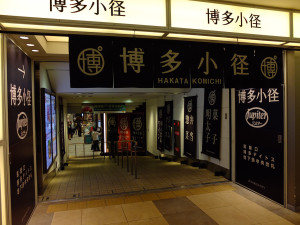 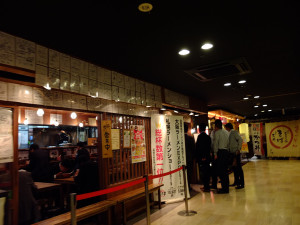