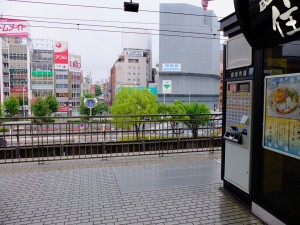 The morning sky was glum, as though feeling the same sadness as I do. The journey is almost over.

I catches a fairly early Shinkansen Kodama. One of the reason I stayed in Nagoya instead of rushing back to Kyoto the night before is the trains times are better from the Nagoya side, most trains do not stop at Maibara and the one from Kyoto doesn’t connect well with the local train.

The rail from Maibara to Toyosato is operated by the private operator Ohmitetudo. “One ticket to Toyosato” I say to the attendant. He replied with a question which I could not understand, it was something about the ticket. Realizing I was not Japanese, the man quickly asked instead if I intended to return, a phrase much easier to understand.

He handed me a ticket after I replied yes, the face of the ticket said SSフリーきっぷ. The SS was a peculiarity, but the フリーきっぷ means unlimited ticket. Assuming SS is Saturday/Sunday this had to be a weekend pass, costing around only 100Y more than the normal fare. Touched by the man’s foresight, I bowed in gratitude. 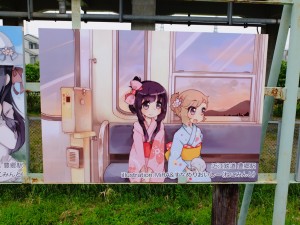 The trip to Toyosato dictated everything about how I packed for this trip. Using a shoulder bag instead of the sensonite case, refraining from buying the cinnamoroll plush I saw at Matsue’s Ichibata department store… all because I now have to carry everything and walk from Toyosato station to the K-ON school.

There are lockers back in Maibara station, but I could not leave my luggage there. Unfortunately once again, the train back to Maibara does not always connect well with the Shinkansen, depending when I leave it can be faster to connect to the local JR train and head down to Kyoto.

It’s a long quite walk through semi-rural field with scattered houses. Spirit is high, the road is lined with cutouts of the K-ON crew who beacons for me to march on. 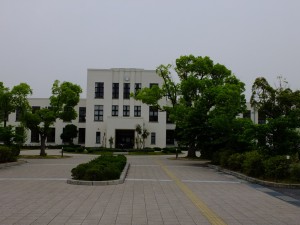 The Toyosato old elementary building was at risk of being torn down, but thankfully efforts were made and turned it into the local community service and tourism centre. Which now fully capitalizes on the K-ON craze.

I reaches the school gate.

It’s not open for another 30min -.- I could swear I checked the opening times online… at least it’s won’t be too long. 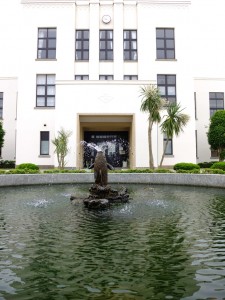 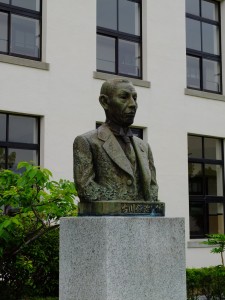 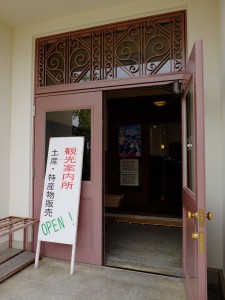 The tourism centre sells a wide variety of cookies, bread, trinkets that ties to K-ON and the local rabbit and turtle celebrity. The turtle bread looked so cute and so very appetizing… alas, I have few money to spare at this point.

Originally I had questioned whether the store could support itself, even if the staff may be volunteers. There’s also even a bento stall in the other wing of the school hall. For a town of less than 10000, a bento stall? 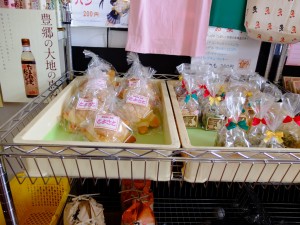 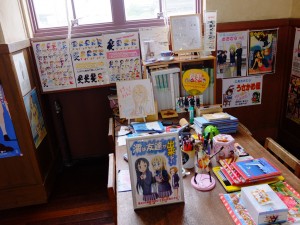 The fear proved unfounded. As the day grew long more and more otakus crowded into the school and by the time I leave there were already a group of people waiting to buy bentos.

The school has become a meeting ground for otakus more than just a pilgrim site which translates to a sustained visitor count. I suppose for a town of this size, it also means there’s no place else for the otakus to go for lunch. The K-ON school was no doubt pouring a decent amount of cashflow into the small town economy. 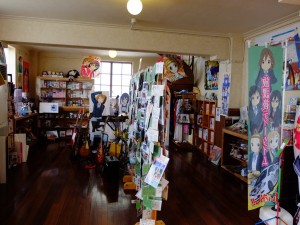 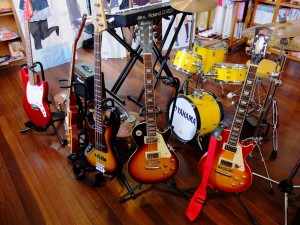 All present and accounted for

The guitars used to be in the music club room, but apparently a few were stolen so they’ve been moved down here where staff tending the tourism centre and shop can keep an eye out on them. 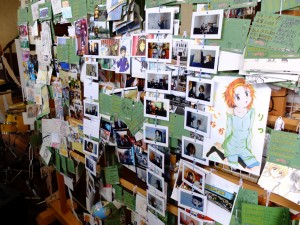 The wall is an impressive collection of well-wishes, from cute to borderline creepy devotias for the K-ON stars. 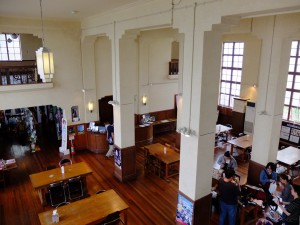 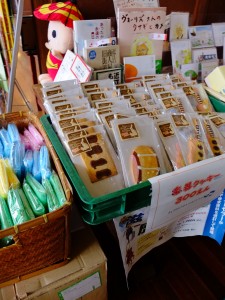 The school is not particularly large. Consisting of a main building of three levels and two wings, a library and an assembly hall, on each side. The first level has been mostly transformed into community service and library (actual library) while the second level lies vacant, like a forgotten corner of history. Through the classroom windows, you see the bright white painted walls of the new school across the yards. 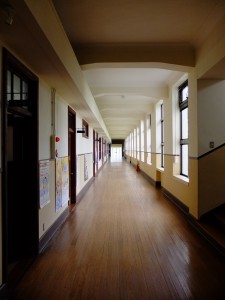 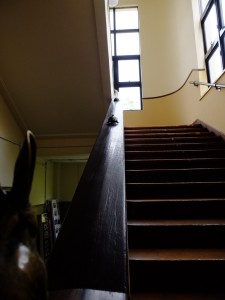 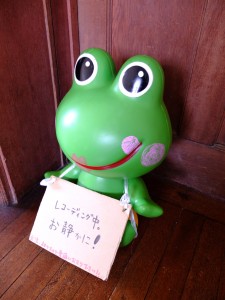 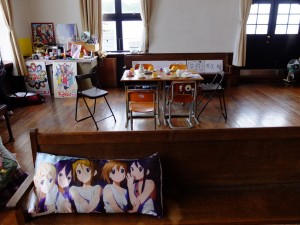 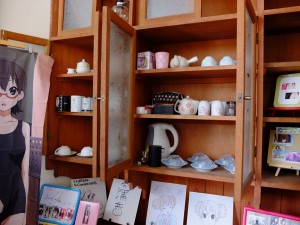 The dedication shown is truly humbling. All the items, decors. A table set with modeled cakes and desserts, cupboards full of tea sets. Though their taste not withstanding… 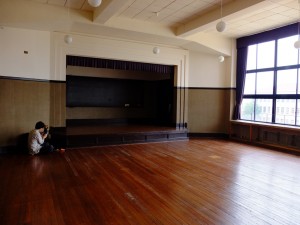 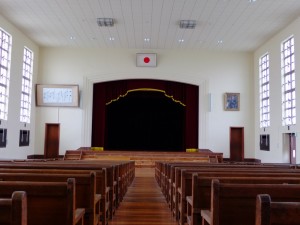 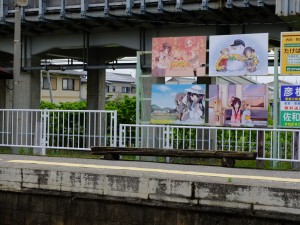 Back at Toyosato station, I look at my huge list of plans A-Z that denoted every possible train connection from Toyosato to Kyoto for the day. In this case I went back north slightly to Hikone and transferred to the local JR and headed down south to Kyouto. 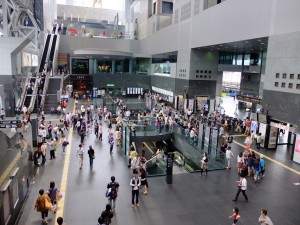 Kyoto station is a super modern that sits jarringly against the city’s supposed cultural history. Impressive nonetheless, the huge complex of glass and steel is an amazing sight to behold from every angle within and out. 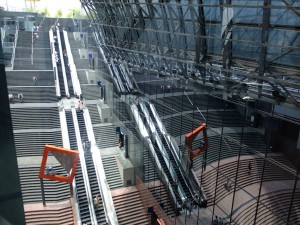 Like many stations in Japan, Kyoto station is also partnered with a department store, the high-class Isetan dominates the station west side behind a flight of a thousand steps. The east end hosts the Kyoto theater with its fancy drapes and wine carpets. 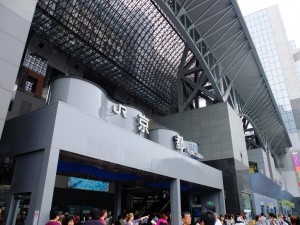 After doing a final, final check of my remaining yen, I deduce there’s enough for souvenirs. I won’t be doing any more walking from here on out, baggage is no longer a concern. Kyoto, being the ancient capital of Japan where the upper class celebrates tea ceremonies, the city is most famous for its sweets. Ranging from traditional to delicate sculpture like modern creations, the amount of choice is overwhelming. 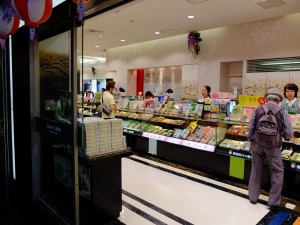 So many different Kyou kashi

Kyoto station has 2 main okashi market, one in the Cube on the station main level and another in B1.

The Cube on ground is more of traditional store, with each okashi brand having its own stall each vying for travelers’ wallet, neatly packaged for those rushing for the train with few time to deliberate.

The ones downstairs are larger, more for people with time to spend. There’s one store in the corner that allows mix-match buying from a variety of okashi brands.

I settled on a red bean matcha roll after weighing carefully between being daring and playing things safe. 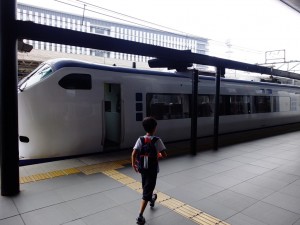 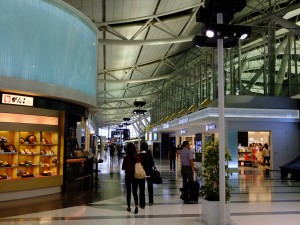 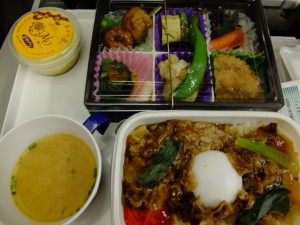