Having just binged Mirai Nikki over the last fortnight, I come away somewhat mixed feelings about it.

It’s a good show, no doubt, and a special one at that. Billed as the yandere show, spawning its own pixiv memes and following the good tradition that pink hair is always black on the inside. It certainly lives up to its reputation, even if I come away feeling a little bait-and-switched at the end (in a good way).

It has a protagonist I hate even more than Shinji (EVA), which is no small feat by itself, but thankfully this story isn’t about Yuki, much like Angel Beats isn’t about Otonashi. Instead they serve as a narrator for the true main character, Yuno and Kanade respectively. At what first seem like a one dimensional character with only yandere as her only trait, Yuno’s emotional range and motive quickly expands and begins to resonate.

It was pretty clear very early on there’s some kind of twisted timeline or rebirth scenario, what I couldn’t quite be sure is which one. I’d leaned on a rebirth ghost scenario for the most part and there’s certainly some elements of truth of that in the end. I choose to ignore any plot holes caused by this as  I consider them acceptable trade-off in creating a jumping off points for the story’s theme. Basically, I ignore paradoxes or manipulated timeline holes as long as they’re not stupid and deliver their purpose, much as I did for Steins:Gate.

Mirai Nikki cannot be viewed other than as the sum of its whole. Of course, that’s how most show should be viewed, however in this case Mirai Nikki can be compared to Shinsekai Yori in that it absolutely cannot be judged in disparate elements or plots, while for say SAO you can quite strongly make the case of looking at it based on each virtual world arc or A Certain Magical Index/Scientific Railgun judged on its current antagonist. Mirai Nikki is one continuous running story with a singular pay off just like Shinsekai. How desirable it is to have a long journey to get to the goal will be up to each’s taste, I certainly feel Mirai Nikki did the journey in a much more entertaining way, but in doing so sacrificed the end impact, conversely Shinsekai had a stupidly dull start in world building but had the ultimate payoff.

I cannot fault Mirai Nikki for choosing this route, I came really close to giving up on Shinsekai on multiple occasions and never felt the same while watching Mirai Nikki.

To bring to topic back to the character of Yuno. She’s twisted, fragile, unhinged, possessive… basically everything a yandere is. I must admit I’m partial to yanderes, perhaps because I myself have some obsessive streaks, and initially that’s all I expected out of the show, some good fashioned bloody stabbing and hacking by a girl gone mad. What makes Mirai Nikki special is how gradually the reason behind Yuno’s insanity is laid out and gives a compelling foundation to her character far beyond what would otherwise be ‘cause yandere in some other show.

Abused by her adopted family, she finally snaps at some point and prisons them in the cage they used to keep her in, accidentally starving them to death. This by itself would be good, but not amazing, if not for the contrast with the 3rd world Yuno, where we glimpse at Yuno’s innocent mind before she descended into madness. As a sweet young Yuno professes her love for her parents and belief that her mother is just a little ill and that one day they’d be a happy family, I cannot help but feel for Yuno and imagine the terrifying horror as she goes over the edge to find she had killed her parents, then having to transfer that hope and dependence onto Yuki, then in a twisted fate find she cannot revive him and make everything whole, betraying their promise and her salvation at the same time.

I would like to believe Yuno isn’t quite as mad in the 1st world. Who while unhinged by her parent’s death still had hope in Yuki and that there’s a happy end for her, who is still a sweet girl that saw the world with light and had a heart that cared for those around her, who still had friends and joy and happiness, and shed a tear for the first opponent she had to kill. Whatever she had been, that was all gone by the 2nd world. She had lost everything, and knew with no uncertainty that she and the world was destined for destruction, and what little bittersweet she was allowed was the few months she could still spend with the one she loves till the end.

What endgame Yuno had in mind when she started 2nd world is not certain, I don’t think even she herself knows outside of the vague notion of  possibly killing Yuki and restarting again. Throughout various points she certainly seemed sincere that she was willing to let Yuki kill her, if nothing else but to free her from the prison she must now be realizing she has trapped herself in.

It explains her lack of care for other’s lives, which initially appeared she’s just selfish (which she still is, but at least now is quite rational in a tragic way) and dispassionate, in light of her knowledge that everything was going to end and everyone was going to die, it makes sense that she would sacrifice all to stay with Yuki, since her frame of “meaning” was no longer grounded in this world. She had no hope left. She’s like a more broken version of Homura (Madoka) who unlike Homura, had no means or chance of escaping (however false they are in reality). Indeed I wonder what Homura would have done had she not had hope of defeating Walpurgis Night, would she also be content to just repeat the cycle to be with Madoka? Madoka: Rebellion (which should or should not be considered cannon depends on which fan you ask) certainly hints that this is not beyond Homura. A side note, the Rebellion BD box contains a special first recording of Homura’s lines and the end she takes on a very yandere voice.

Overall there’s little to fault on Mirai Nikki (arguably some nudity and perversion, I consider them just setting the tone to unsettle viewers). The diary mechanic and their owners at times did not feel very well executed or utilized, however at the end I felt this was secondary given Mirai Nikki is really only a game show superficially.

While not mind shattering I do think Mirai Nikki excelled and punched above the common yandere trope and cast a new light on the stereotype. Yuno’s character is highly complex and interesting, more than sufficient to overcome Yuki’s annoyance (which is not something I can say for EVA’s other characters for Shinji). Yes, I’d say that I quite like Yuno. And yes, I’m aware that doesn’t bode well for myself or my health.

It’s also worth mentioning the excellent ED songs which gave fitting insights into Yuno’s state of mind, drawn into her depraved insanity with her chilling anguish and clinging perverted love.

It was hard to decide on a rating for Mirai Nikki. I think probably a S*A-2 (two minus). It didn’t have quite as deep or as meaningful a story as some others in the A rank, its premise and execution puts it generally above other B rankers. Overall I think I would still puts it in the must watch category. The Special is for Yuno’s portrayal that makes it one of the more memorable anime for me.

Oh man, I wish this will get animefied one day. It’s hilarious, Tiv has really upped her storyboard skill, the moments, pacing and highlights are absolute gold, combining the right mix a chibi and full-page focus. Mixed with her unique art style it is definitely a keeper.

Shindere Shoujo to Kodoku na Shinigami, or Girl who Adores Death and the Lonely Reaper. The fine touch given to the clever title is hard to come across in translation, just know that it is very catchy. 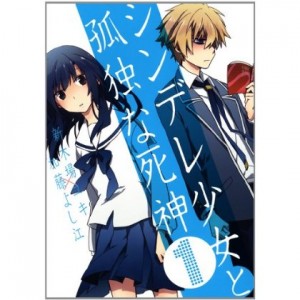 A folklore middle-school detective drama set on a small out of the way island shrouded in mysteries. The heroine Akira (彰) whose goal in life is to leave the island into the big wide world meets new transfer student (is there any other kind?)  Nishigami (西神). Nishi-gami, shini-gami, notice the play on word.

Then.. without spoiling.. let’s just say the author took quite the intriguing and evoking take on life and dying.

I love this manga. For one, it’s free from SquareEnix’s GanGan Online manga site (current month’s issue only), and secondly, no fan service – the skirt of Akira’s uniform has to be the longest I’ve seen in possibly the past few years, yet Akira is so unbelievably adorable~ gosh, just fantastic artstyle and characterisation.