This trip has been a real learning lesson. After how well the Sanin and Shirakawa trip went I’ve gotten a bit confident.

A lot of things went wrong on this trip, some in my control and some out of my control. Interesting unlike previous trips, I for the most part got the micro bit right, with the pacing and on the day decisions. The macro part, the overall plan which I’m usually pretty good at tackling with meticulous over-planning, this time came back to bite me as all the over-planning reduced effective prioritisation.

In short, I gambled on this trip and lost. In fact, I gambled twice and lost both times. I failed to get on the Twilight Express and failed to catch the autumn leaves in Oirase. In attempt to balance the two in planning meant I never fully committed to either (full do or die on Twilight express would have gave me 12 chances over 2 weeks, if I was willing to kill time around central Japan until a train is secured). In light of that my gamble failing many aspects of the trip was a waste and in hind sight were wrong or unnecessary.

Making the trip 15 days was not needed and doing so cost me over 6000Y on the first day.

I might have gambled on one thing instead of two. If I had not been so fixed on Twilight Express I could have picked an earlier time with flexibility to go to Oirase on different dates pending on the autumn leaves.

Not much to be said, I wish I’d never went there.

The best part of the trip. A fantastic side tour to Yamadera, great hotel and breakfast.

I still can’t believe I ran the 10km Oirase in 2.5 hours. If I hadn’t made it in that time I would never have caught the ferry which turned out to be quite a scenic ride.

Hirosaki is where I actually ended up with the most autumn leave shots.

The Nebuta house and especially Hakkoda ferry museum both turned out to be better than imagined.

This is the phase where a lot of things possibly went wrong and my mood was almost devastated.

One bright spot is Chusonji, seeing the golden hall was really an eye opener.

Sendai, in retrospect could have been done with day trips from Aomori. In the initial planning I thought I could watch the sunrise and sunset at Matsushima but given both plans were voided early on I should have revisited the basis on which I planned two nights at Sendai. In the end it was time wasting and expensive.

Leaving Matsushima early because of the weather was probably the correct choice, but I should have planned for better contingencies and things to do in Sendai, as it went I spent half of the afternoon wandering the shopping arcades, not that that wasn’t interesting itself.

Hakodate, a beautiful city but the cold overwhelmed me. I wish I had braved the cold and got some night time shots.

Lake Toya, almost perfect all the way. I’m starting to think I should have gone up close to the observatory. Also, not enough photos of the town itself.

Catching the Hokutosei when I couldn’t get the Twilight Express remains a divisive choice. On one hand I spent a lot of money (16000Y) and the train was in pretty terrible shape, but it did give me quite the unique experience. Plus, I wouldn’t have gone to Himeji otherwise (backup with Sunrise Seto puts me right at Takamatsu the next morning)

It was fortunate I hopped off at Himeji. Not only was the castle a sight to behold it gave me the morale boost I desperately needed at that point.

Matsuyama castle is without a doubt one of the best castle in Japan. It is the first castle that feels like a fortress instead of just a keep rising out of a park like many others.

The Dogo Onsen is a little less interesting. I think it requires a more relaxing approach, take a bath there and go on a evening walk to get the full experience. However given the position of Matsuyama this will not be so easy to plan.

Konpira is weird. It’s not so much seeing but climbing, overall I’ll say it was a good experience.

In contract, Takamatsu is lacking in attractions. Ritsurin garden is decent, but there are many other Japanese gardens of its calibre throughout Japan. It won’t be the attraction that anchors a trip.

I lucked out with the Evangelion exhibit as it was never in my sight until I saw the banner in the arcade.

Overall I’d say about 70% of the trip went to plan.

I blew my original budget by close to 20%. This is in mostly due to the Hokutosei and I forgot to factor in how much visiting temples cost. 300Y here and there does add up quite quickly.

A rough breakdown by back of napkin numbers. Airfare is only for flights between Taiwan and Japan. 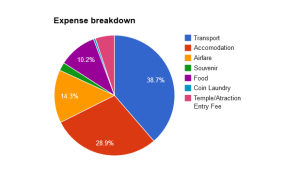 In total I shot over 40gb in about 9500 photos. Another few hundred and the photo folder will look really weird as the file names start repeating. (they go from 0000 to 9999)

A basic view of where I visited and stayed. 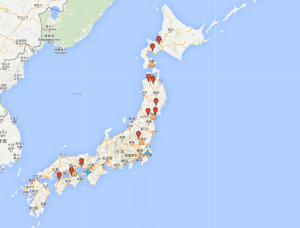