Adding in Yatsusan-kan, despite the initial headache, worked out better than I hoped for. My parents are quite pleased with the experience there, their first time at a ryokan and public outdoor onsen, and I loved the atmosphere of the heritage building.

If anyone is thinking about heading to the Hida Takayama area and might be considering a ryokan, I cannot recommend Yatsusan-kan (八ツ三館) enough. It is incredibly close to a station (less than 2 minutes if they drive you, and since it’s so close they can come out or drive you anytime you ask, no reservation required, they’d probably appreciate a head up but it just means whether they can drive the van around now or a bit later).

The place is full of charm and the staffs are very kind and helpful, several of them also have decent English so it’s no issue at all. The food is also excellent (I don’t know about wow since no food has ever made me wow, none of them disappoint)

There are a few other ryokans that look to be also quite traditional, however they are further out into the mountains and takes more time and effort to get to (whether you drive yourself or arrange a pick up with them).

I miss it already, if I ever swing past the area I think I will definitely spend another night with them.

The plan to not use the Hida Road Free Ticket and go to Yatsusan-kan on a Friday is absolutely the best decision made. The amount of money and time saved, as well as enjoying a mostly empty ryokan without much people to contend the onsen with.

During planning, the budget for the entire trip excluding plane tickets and souvenirs are about 78000Y per person. Because we actually cheaped out on a few meals, bought fewer snacks and drinks and had no unexpected expenditures, the cost ended up being around 70000Y only. For that we spent 6 days, stayed at a ryokan and a homestay during lightup. Traveling with others is definitely so much cheaper on accommodations, that’s about the same as my San’in trip which was business hotels all the way (most of the cost was spent on the JR Pass, so many it’s not a fair comparison)

Even if you add in the plane ticket that’s close to what a 5 day tour of Nagoya + Hida + Kanazawa from Taiwan would cost if you went with a packaged tour.

Choosing Shimizu as the homestay at Shirakawa-go is the right one, my parents got back quite a bit earlier than me and had the owner been unable to speak English I imagine it would have been quite inconvenient and nervous for them.

The decision to spend more time by myself at Takayma was also spot on. I got to cover 90% of all the Hyouka spots and the chance to buy the special limited Takayama only coasters. 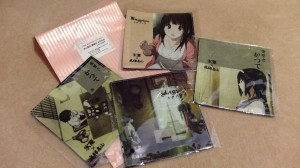 Hyouka limited edition coaster only sold at 4 places in Takayama 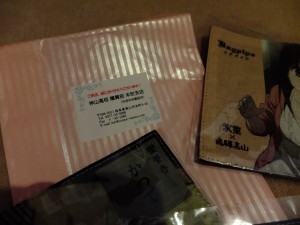 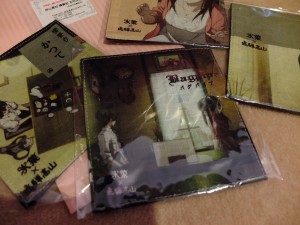 Chitanda’s confession (of sort) at Bagpipe. What melts my heart is when one looks, this actually is the confession, unknown to the two. 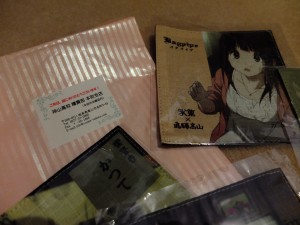 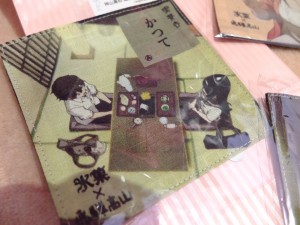 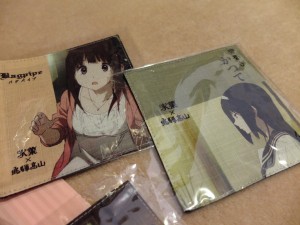 Irisu’s cold, regal stare. Chitanda may be the cuter one, but Irisu is my absolute favourite

There’s a proverb to not worry excessively about things, this has definitely been true for this trip. Or perhaps you can say luck has been with me.

The easiness which I secured homestay at Shirakawa-go, relatively trouble free affair of acquiring various tickets, the thoughtful service of Yatsusan-kan to send an inquiry email (in both English and Japanese) and to actually come out to meet us at the station.

Though it was snowing heavily at Shirakawa, the snow actually made for quite beautiful and unique photos not usually seen for light ups. And luck would have it, the snow died down to okay levels just in time for the light up.

Skipped too much on research on meals. Most of my planning was spent on sorting out the schedule, only the bare minimum was spent on trawling through Tabelog. When my parents expressed they didn’t like ramen (something I really should have anticipated), what I researched went out the window. We ended up eating not as well as I’d like.

If this had been a trip just by myself, I wouldn’t have cared. I can dine on convenience store fried chicken, bread and coffee all day. But for my parents more proper meals should have been there.

I think the decision to not line up at the tripod queue was probably a mistake. I don’t know how much a tripod would have helped, but it probably would have gotten me more usable shots.

Overall, I’m pretty happy with the trip. I’d say 85% went according to plan or better.