For some reason, perhaps age, there simply wasn’t a hotel near Nagoya station that has free wifi. I was left a little uneasy without email and the chance to recheck things should the need arise.

I start by looking for a place to have breakfast. First choice would be… Doutor! Trusted and reliable coffee place in my previous trip in Tokyo, it will be a real treat if I can find one. There’s also a Mac in the station but I would rather not line up in the scary queue. 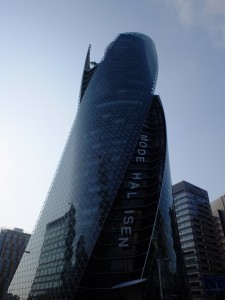 Luck was with me, I picked the right direction to explore and spotted the familiar yellow and coffee sign a block from the station. 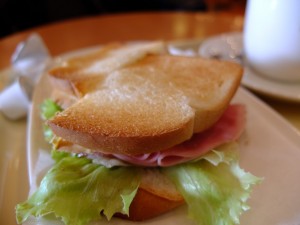 Even better, the place has wifi. I quickly check my mails while sipping latte. 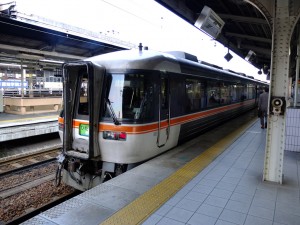 Once again, gotta love the JR Rail Pass. Without it I would never have been able to make the switch and incorporate this trip to Takayama. Guaranteed seat to and back. The Hida Express is a surprisingly basic diesel train, unlike the Yakumo which was not only electric but also a tilt train. Guess while San’in is a backwater, it’s still more important economically than the tourism heavy Hida-Takayama area. 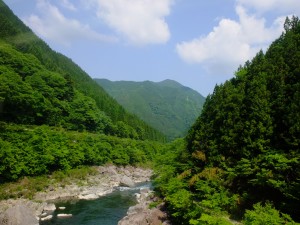 Scenic route through the mountains

It’s a few minutes after 10 in the morning when the express finally rolls into Takayama, just about the right time for a sleepy mountain town to wake up.

Onto the platform, the cold refreshing mountain wind draws out barely containable excitement. And a jacket. 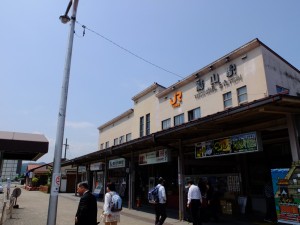 The walk from the station to the town centre was… much further than expected. I can see why the Hida train pass offers a taxi combo option. If you’re not a fast walker and/or are dragging heavy luggage, you need that taxi. 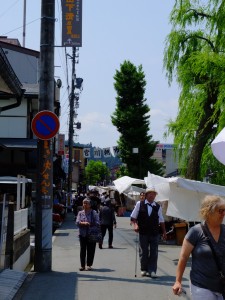 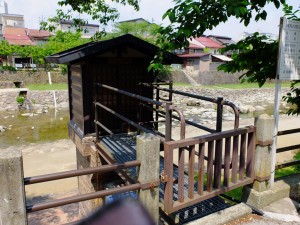 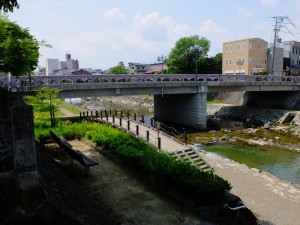 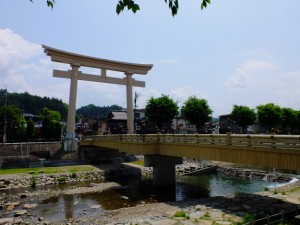 Bridge leading to the Sakurayama-Hachimangu Shrine 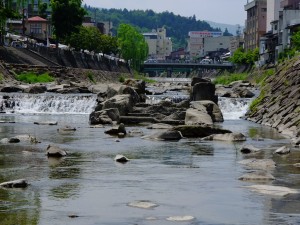 A fish ladder shown in the OP

My original plan is to get to along the river to the north end of the historic area, wind my way back through the main historic street which should take me all morning, then back across the river to the shopping street right in time to find somewhere for lunch.

Well, that was the plan. I totally lost my pacing in the excitement, scared I might not be able to see everything I wanted in time I rushed…

Ended up back in the shopping street far too early. 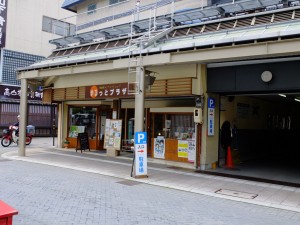 Tourism and omiyage centre in the middle of the shopping street 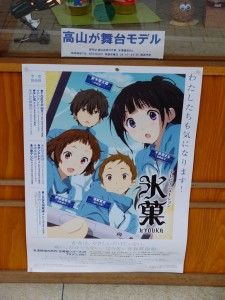 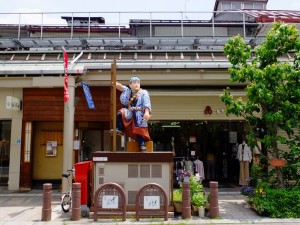 In the anime the statue is a tiger 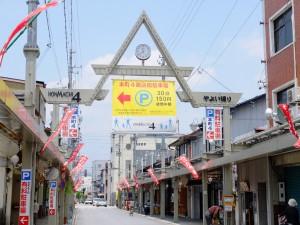 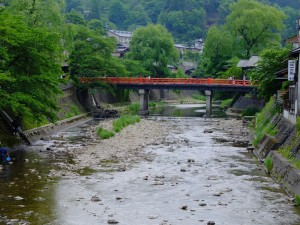 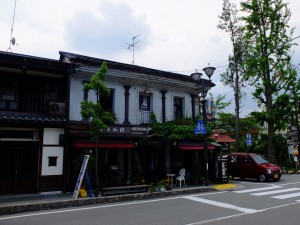 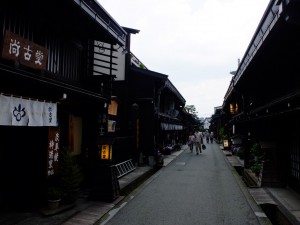 I ended up not having proper lunch. In retrospect 3000Y probably is fair for a wagyu steak lunch set. In any case, I ended up getting a wagyu steak kebab, a grilled riceball skewer from a street side stand and hot chocolate from Bagpipe. 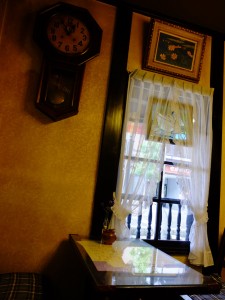 After some nourishment it is time for the expedition to the Hie-shrine, almost 2K to the south of the city centre. 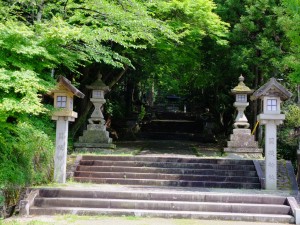 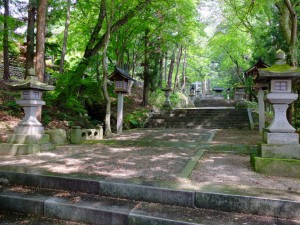 I went to the shrine from the east side of the river, and came back on the west. 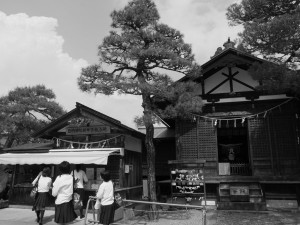 Hie Shrine branch next to Naka-bashi 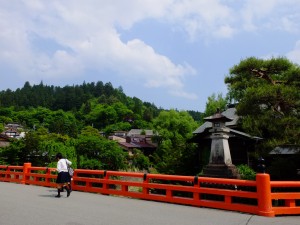 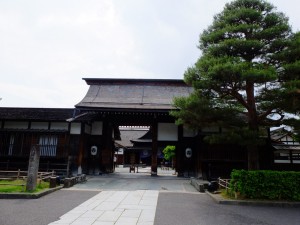 I took a long while to decide whether to visit the Government House. It is my second last day and I have already started budgeting, not wanting to have too much left over yens. I had to crunch the numbers again and again to be sure I’ll still have enough left for dinner and tomorrow after paying the entry. 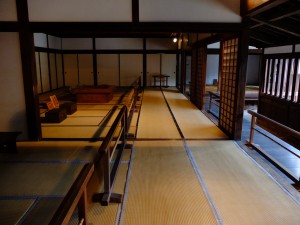 It was well worth it. The Government House is very well kept and maintained, showing large complex that served both official and private functions. Even better were numerous articles giving an overview of the area’s history, the kind that interests me immensely. The signage and guides in both Japanese and English, else I would not have been able to understand much of the very technical and historic era relevant terms. 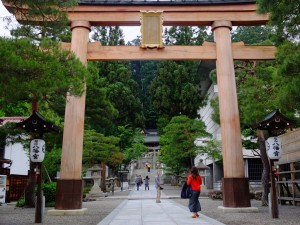 Torii leading up to the Sakurayama-Hachimangu Shrine 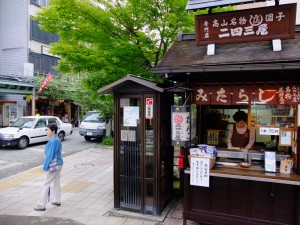 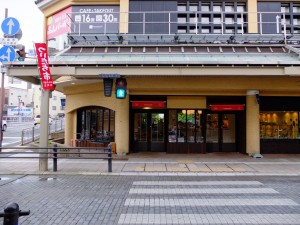 I booked the last train back to Nagoya. I got to the station early though to ensure I’ll be able to pick up an eki-ben. One of the best decision I made today, there were only a few left for each kind, and only one left for the wagyu beef I had set my stomach on. 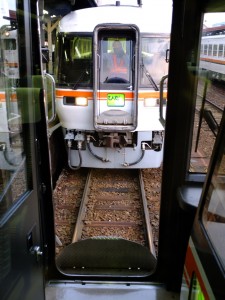 Superb Japanese efficiency. Joining the two trains took only a few minutes. The new train had just came up from Nagoya, after all the passengers had disembarked, they slowed backed the train up to the one I’m on which was already waiting. The two trains joined with a bump, the crew popped the metal planks down and secured the walkway, and it was done. 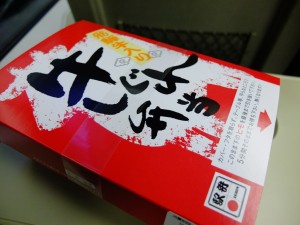 It’s a bento full of meaty goodness, and more importantly, it’s one of those self-heat ones. Not just heat it so it’s warm, but steaming hot. So steaming hot I almost burned my fingers when I tried moving it. 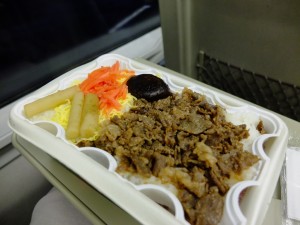 Taste is great, can’t say I can tell the difference from normal beef though. I also would have liked more variety in the side dishes. more veges. But hey no complaints, the bento portion is good (most important) and fits my “eat on the go” save time idea.